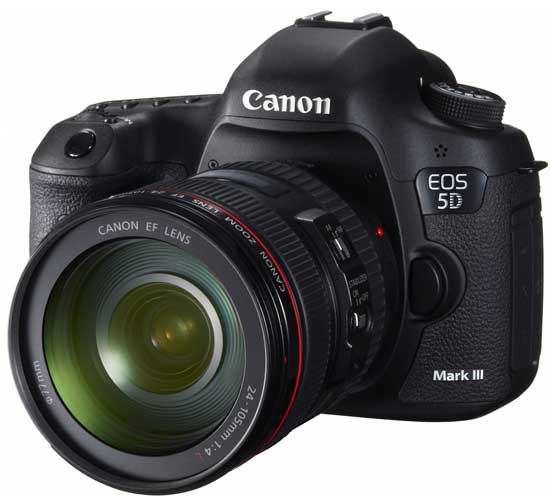 Upon its release, the EOS 5D Mark II redefined full-frame photography and filmmaking. In pushing the boundaries for a high-quality, full-frame DSLR camera with full-HD movie capability, Canon has once again set expectations higher with the development of the EOS 5D Mark III. With key improvements such as a faster AF system, higher shooting speeds and increased ISO sensitivity, the EOS 5D Mark III is able to comfortably handle low light environments.

A New Sense of Speed
The EOS 5D Mark III comes with the same 61-point High-Density Reticular AF System found in Canon’s flagship EOS-1D X. This makes it easier for photographers to very quickly compose portraits and track fast moving subjects, while maintaining focus on their images. The new AF system is also advanced enough to allow photographers utilizing f/4.0 lenses to achieve rapid AF speeds usually associated with f/2.8 lenses on the EOS 1D Mark IV. The number of cross-type points for both f/2.8 and f/4.0 lens have been increased to 41, with f/2.8 dual cross points as the central five points. For f/5.6 lens, it comes with 21 cross-type points, hence making full use of each lens’ optical characteristics to optimize performance.

With a faster AF system, the EOS 5D Mark III CMOS sensor has also been upgraded to make use of eight data channels (twice as many as the EOS-5D Mark II), forming a perfect combination with the enhanced data processing speeds of the new DIGIC 5+. To ensure that there’s no significant shutter-release time lag to compromise the fast AF system, the EOS 5D Mark III also comes with a better mechanism to power the reflex mirror. This new mechanism suppresses mirror bounce, and hence is able to achieve a time-lag response of only 59 milliseconds, providing ample time for AF and AE computations.

Professional Filmmaking Functionality
The 5D Mark II was the first EOS camera equipped with EOS Movie, which quickly revolutionised the filmmaking industry when it was used in the production of commercials, TV dramas and movies. In designing the EOS 5D Mark III, Canon’s developers worked with professional cinematographers to come up with enhanced EOS Movie functions for improved video quality and easier editing.

The EOS 5D Mark III significantly reduces colour artifacts and moiré in areas containing striped patterns. This is a result of its new CMOS sensor and the increased S/N ratio of the new DIGIC 5+ processor, enabling videos shot in dimly-lit environments to have lower noise, even at higher ISO speeds.

The EOS 5D Mark III also promises greater editing flexibility as it supports a wide range of frame rates, from Standard Definition to Full HD, in 30P/25P/24P. It also supports both ALL-I and IPB compression methods to suit different post-production needs. ALL-I results in larger file sizes, but editing is made easier as the frames are individually compressed. IPB compresses frames in groups, which reduces file sizes but increases decoding times.

For filmmakers who require smooth, uninterrupted filming, the EOS 5D Mark III supports continuous shooting up to a maximum of 30 minutes recording time. During shooting, the camera will automatically create a new video file once the current file reaches 4GB (the maximum file size for FAT file systems).This ensures that there are no lapses between files, so editors can effortlessly splice files together without any glaring jump cuts.

In-camera Creativity
The 5D Mark III pushes creative limits by implementing a new High Dynamic Range (HDR) mode: a first for its series. The HDR mode combines three images shot at different exposures to form one single detailed image. By taking one shot at the recommended exposure, one that is over exposed such that it provides visual data for the subtle gradations in dark areas and lastly a underexposed shot that provides visual data for areas that would be blown out under normal exposure, the combination of the three images will result in a single image that contains clear details and tones in all areas.

Other creative functions include the ability to take multiple exposures to superimpose different images on top of one another. This allows for artistic juxtaposition of different scenes, or can be used in conjunction with the 5D Mark III’s speedy 6fps continuous shooting mode to recreate the appearance of flow of motion in a shot with moving subjects.

For filmmakers, the 5D Mark III is also equipped with a Quick Control Dial which has an inner ring that can be triggered by an electrostatic touch sensor. With this silent control dial, cinematographers are able to change settings while shooting movies without recording any clicking sounds emitted from the control dial.

Ergonomic Form Factor
The EOS 5D Mark III comes separately with a new battery grip, BG-E11, which is designed to facilitate vertical shoots and longer battery life. Made with the same magnesium alloy as the EOS 5D Mark III, it carries the same dust and water resistant qualities, and comes with a multi-controller and a customisable multi-function button. The battery access of the grip has also been relocated to the side, for a curved form that provides a comfortable grip for horizontal and vertical shooting.