Futuremark® today announced the return of its annual Lords of Overclocking competition for PC users everywhere. This year’s event, the largest of its type, will see overclocking pros, enthusiasts and hobbyists from Europe, Asia, Africa and the Americas use 3DMark® 11 and MSI brand video cards to compete for the title of “Lord of Overclocking” for their region.

The top contestants for each region will win a grand prize trip for two with travel and hotel included to compete in the MSI Master Overclocking Arena (MOA) 2011 grand final in Taipei. The complete prize pool includes the latest and most desirable video cards, motherboards, cases, memory, coolers and power supplies from competition sponsors MSI, Huntkey, Kingston and Enermax. 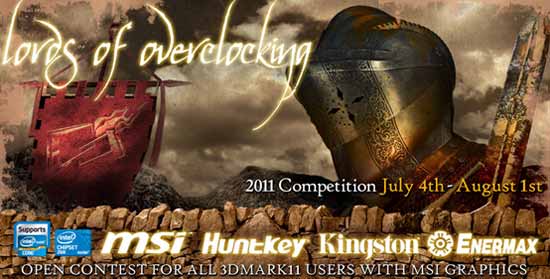 The Lords of Overclocking contest will run for four weeks from July 4 to August 1 with prizes awarded to the top weekly winners in each region. Additional winners will be picked at random from all qualifying entries each week, ensuring everyone has a chance to win.
Jukka Mäkinen, Futuremark CEO, said:

We are excited to once again bring the world’s most talented overclockers together for our annual Lords of Overclocking competition. With great prizes on offer from some of the most recognized names in PC performance it promises to be a closely fought contest.

This is the third year MSI has partnered with Futuremark to promote Lords of Overclocking as the premier online qualifying event for MOA. Lords of Overclocking gives enthusiasts and overclockers around the world an opportunity to experience the performance, stability and quality of the military grade hardware in MSI mainboards and graphics cards in an exciting competitive setting.

Lords of Overclocking is a worldwide online qualifying event for the prestigious MSI MOA 2011 competition in Taipei which will see the world’s top overclockers go head to head in a fiercely fought battle of extreme overclocking.

Contestants will be competing to achieve the highest score with 3DMark 11, the latest version of the world’s most popular benchmark for testing PC gaming hardware. Featuring a combination of real-time visual and numerical computation tests, 3DMark is the standard for measuring PC video card performance and is supported by an online database containing over 35 million results. 3DMark 11 Basic Edition is available as a free download from Futuremark’s website.

Visit the Lords of Overclocking 2011 competition website for further details.